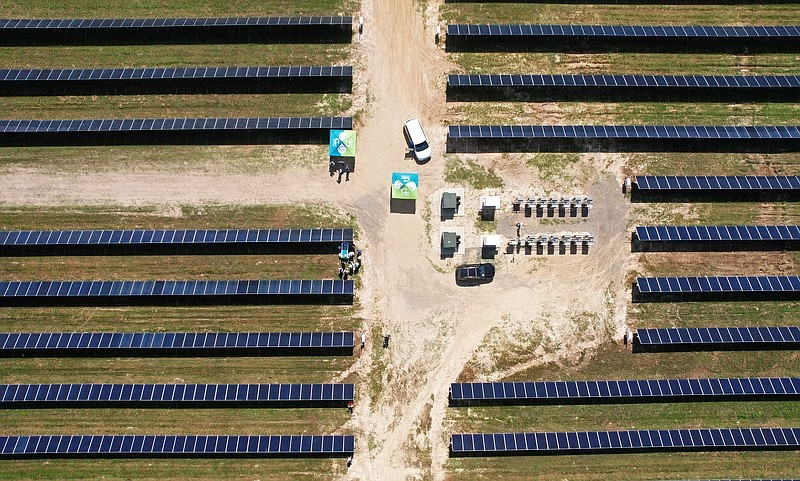 Work to build the solar system began in 2021 at the field near U.S. 67/167. The facility went online and began generating power in the first week of May.

The ground-mounted single-axis tracking system allows panels to tilt and follow the sun throughout the day.

The project represents Central Arkansas Water's first foray into solar energy and came in the wake of state legislation in 2019 that revised rules on solar-power production.

The water utility, which serves more than 450,000 customers in the greater Little Rock region, purchased the Cabot property in 2019.

The Arkansas Public Service Commission gave its approval for the 4.8-megawatt solar facility in December 2020.

Under an agreement with solar company Scenic Hill Solar, the company will lease the Cabot site from Central Arkansas Water and operate the facility.

Scenic Hill Solar will sell electricity generated by the plant back to Central Arkansas Water at a rate of 5.1 cents per kilowatt hour.

The initial term of the agreement with Scenic Hill Solar is for 20 years, with two potential extensions of five years each. Central Arkansas Water also has the option to purchase the solar system five years from now.

Scenic Hill Solar Chief Executive Officer Bill Halter on Tuesday described the system as one of the largest solar arrays in Arkansas and said the path to the project was "hard-fought."

"It took a lot of public meetings, it took testimony before the Public Service Commission, it took action in the state Legislature to make this viable," Halter told attendees.

Tad Bohannon, chief executive officer of Central Arkansas Water, said the facility was an example of a public-private partnership that worked.

The solar array is expected to meet 20% of the utility's electrical load, Bohannon said.

The "real savings" for customers, Bohannon suggested, will come 10 to 12 years from now. The water utility will be able to budget with the knowledge of what it will be paying for power and ratepayers will be protected from future increases to the cost of electricity, Bohannon said.

Tuesday's event, which also featured Cabot Mayor Ken Kincade, was originally scheduled for April 20 but was delayed after hail damaged the solar facility.

Halter said in an interview Tuesday that around 240 to 270 of the more than 11,000 solar modules were damaged and had to be replaced.

Those modules were insured, he said, meaning there was no cost for ratepayers associated with the damage.