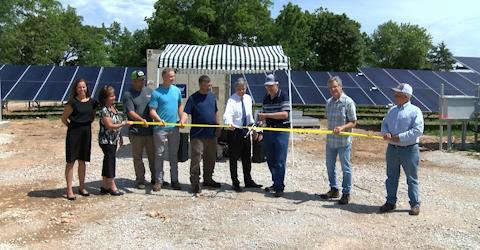 The two companies partnered in November of 2019. OMRPWA had the goal of a solar power plant providing power for the water utility. Before 2019, Arkansas was well behind in solar power production. According to the Advanced Energy Association, the natural state has seen an increase of almost 2,000%.

“Increasingly, you’re seeing that the cheapest form of energy production is renewable. It’s either solar or wind,” said Bill Halter, CEO of Scenic Hill. “We’ve seen this increase because the cost efficiency of solar power production has simultaneously improved.”

Halter says solar is an accessible resource in Arkansas that needs to be utilized to benefit all. Recent events have shown the importance of diverse energy production.

“The most recent dramatic example was in Texas last year where you had record cold and demand for heating purposes,” he said. “Coupled with grid stations going offline, that created the perfect storm whereby you did have rolling blackouts and some real human tragedies.

The new Harrison solar plant is a 1.1-megawatt solar power system on approximately seven acres of land. There are 2,500 solar modules, and this power plant will produce enough electricity to power 200 homes entirely in a year.

It will provide energy for the OMRPWA, which estimates it will save $7,000 per month by moving to the solar.

“We were looking for ways to save money, and I’d heard about Scenic Hills to see if a public water authority was applicable,” said Andy Anderson, chairmen of OMRPWA. “Right now, we need the money for some projects, major repair projects that will be underway.”

OMRPWA anticipates the move to solar will directly result in lower bills for customers down the road.

“It’s taken a lot of time to get here, and there were plenty of obstacles,” said Anderson. “We were truly excited to get it online and start saving some money.”

“We’ve seen prices go up with the spike in natural gas charges in recent months,” said Halter. “The way to avoid that is to move to solar, where the fuel cost is literally zero, nobody is charging us for sunshine. There’s plenty of it. It’s time we put it to use for the benefit of all Arkansans.”